The average over-the-road truck brings $800 in revenue each day. But when a truck wrecks, not only does the driver lose that daily revenue, but often, traditional body shops keep the wrecked vehicle longer than the actual repairs require. Hitting a deer, for example, might cause minor cosmetic front-end damage that takes a week to repair, but the turnaround could be two weeks, a month or even longer.

“The small company whose truck is sitting for seven days has potentially lost $7,000 worth of revenue, and you just don’t get that back,” said Mike Abbott, owner of ATS LLC, a small brokerage and refrigerated fleet based in Crossville, Tennessee. “When you prepare yourself for a week’s worth of revenue loss and for some reason it becomes two weeks, you’ve just multiplied that to $14,000. For a small company, that’s hard to swallow.”

The SONAR chart below shows the average number of miles driven by a refrigerated truck per week over the past year; mileage or lack thereof is directly correlated with revenue earned or lost.

These protracted turnarounds keep revenue out of driver’s pockets for a variety of reasons. In a typical dealer repair center, wrecked trucks compete with warranty service jobs, which pay more than collision repair ($125 versus $85 per hour). Also, the labor required for wrecked trucks can be unpredictable and specialized, and the damaged vehicle often spreads across two or three bays, cutting into the shop’s efficiency and bottom line.

Abbott’s small fleet consists of 18 refrigerated trucks, and within the past year, three trucks have needed major repairs. Instead of compounding the revenue loss by sending his trucks to the dealership body shops, he has them towed — regardless of where they wreck — to Fitzgerald Collision and Repair (FCR) in Livingston, Tennessee.

FCR, established in 2014 by Robert Fitzgerald, is not your normal body shop. By focusing exclusively on collision repair for Freightliner Cascadia and International trucks, Fitzgerald’s business model imitates an assembly line, with 130 employees organized into specialist teams to increase productivity ?— “no different than a well-rehearsed Nascar crew,” Fitzgerald said.

Whether the job requires work on interiors, panel replacements, frames, electrical issues or hoods, there’s a well-trained team to tackle it — and quickly. Even if a truck wrecks a thousand miles from Livingston, Abbott believes that using FCR is worth the tow bill that could run $10,000.

“A small fleet doesn’t have extra trucks sitting around,” he said. “Our last wreck happened in Kansas, and they wanted us to take it to a dealership in Kansas. I wanted it with Robert because I knew that the turnaround was going to be quicker. With a small business budget, you don’t have a spare truck to run and can’t absorb the costs of renting a truck for an extra two or three weeks. It’s worth bringing the truck to FCR because they do exactly what they say they’re going to do. If he told me he’ll start on Monday and have it done Friday, we’d go get our truck on Friday. We run basically new trucks, and they were repaired to as close to new as anybody can do it.”

Since companies must get all repair estimates cleared by their insurers, FCR is also very competitive on price with other body shops. Where Abbott saves money is the turnaround time, but that is not the only reason he keeps coming back.

“The thing that impresses me about Robert and his operation is that he could handle the biggest trucking company out there,” Abbott said. “He can handle its needs and yet be able and willing to handle the guy that’s got one truck, 10 trucks or 20 trucks and give him the same courtesy and be able to keep him going.”

FCR’s first customer was Max Fuller, co-founder of U.S. Xpress, a Chattanooga, Tennessee-based publicly traded trucking company that owns 7,000 tractors and 15,500 trailers; Fitzgerald was able to shorten Fuller’s average 38-day turnaround to, at one point, four days. But Fitzgerald understands the pain points of collision repair, not only for large companies like U.S. Xpress, but for owner operators as well.

“If you’re an owner-operator, then your entire paycheck is based on that one truck that you’re out there running,” Fitzgerald said. “Many of those guys live paycheck to paycheck and have families to support just like the rest of us. When their truck is down for months sometimes getting repaired can mean the difference in them going broke or not going broke.”

FCR now offers a generous payment of $150 per day to owner-operators if they aren’t able to repair their truck within 10 days. Abbott said he’d never heard of a body shop showing preferential treatment to owner-operators. Beyond FCR’s uncanny speed and proficiency, Abbott praises Fitzgerald’s commitment to safety and integrity.

“The day we picked up the truck, even if it took us all day long to go through that truck and look at everything that was done, [the FCR team] was standing right there looking at it with us,” Abbott said. “If there was ever a nut or bolt loose or anything else we could find, they’d say, ‘We’ll get this thing fixed right now. We’ll tighten it up.’ It wasn’t like, ‘Let’s get you done and out the door.’” 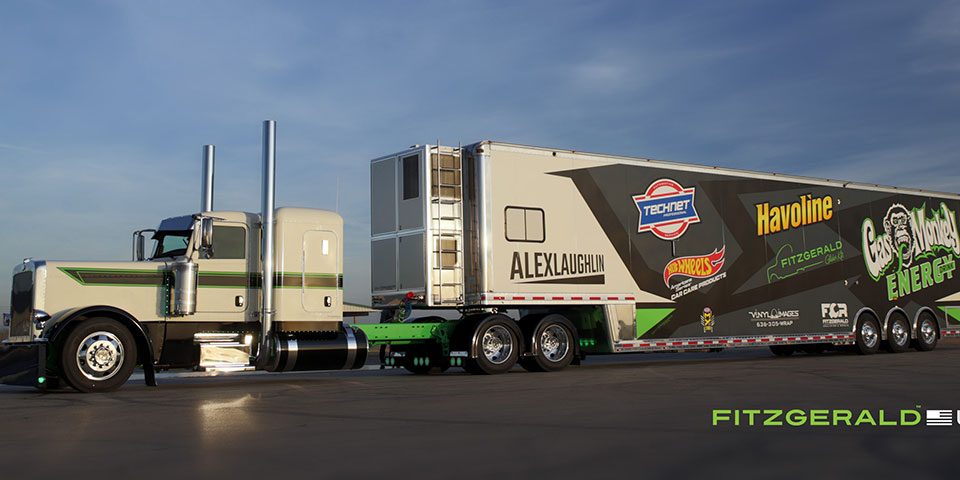